Last Barbie review post before my comparison pictures! Today we look at the Tall Barbie.

The last of my four new Barbies! She was one I settled for because the Tall one I want isn't available yet. But I did like this doll's curly hair and that teal skirt!


I'm really glad I liked her curly hair in general rather than how her hair is styled, because the images that show her do not accurately represent how her hairstyle looks in real life. And the back of her hair looked so sad. lol

I'm not a fan of her shoes, but that might be because I like the higher heels on my Barbies. Maybe if they had an open toe I'd like these shoes more though.

She has a small bracelet, which is secured by rubber band because it is way too open and small to stay on its own like my original's bracelet.

I tried brushing out her hair a little, to fill it in a bit I think. It made the curls seem a bit softer.

Behind her is the image they put out of her. I wish her curls started a little higher on her head. I also kind of wish her hair was a bit brighter of a red. It looks more like an auburn brownish color in person.


Her bracelet and her skirt are my favorite parts of her outfit. Not too keen on the shoes. I dislike her shirt.


Here's my Tall doll without clothes:


So she has slightly longer legs than original. And she probably has bigger feet. It looks like her torso is a bit longer too. She has a slender figure, pretty much goes straight from her chest to her hips without dipping in at her waist.

Her skirt is lovely. It's a thin fabric and it has an elastic waist. Her top... I really don't like her top. The print is cute. But it's too boxy. I pulled the back so that the velcro crosses over and only barely touches and it's still too loose. If it was tighter, or shorter, or if the collar wasn't so high to make it look boxy... any of these things would have greatly improved this top. What kills me is that there's darting, but it still feels boxy.


So I tucked her shirt in. It's improved her top so much. Much better!


Overall, I like this doll a lot. I do love her curls, and her skirt. And I like the tall dolls. I gotta admit though, seeing this doll in person versus it's promo pictures makes me scared to get the tall doll that I want. I feel like her hair might look more like a clown... we'll see. ♥


OMG, so I took all of these pictures on a comforter that's on an inflatable mattress. I managed to get this lady to stand on her own on the bed. Bah hahahahahaa 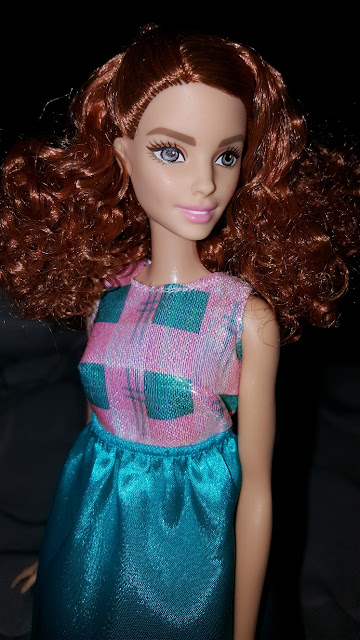 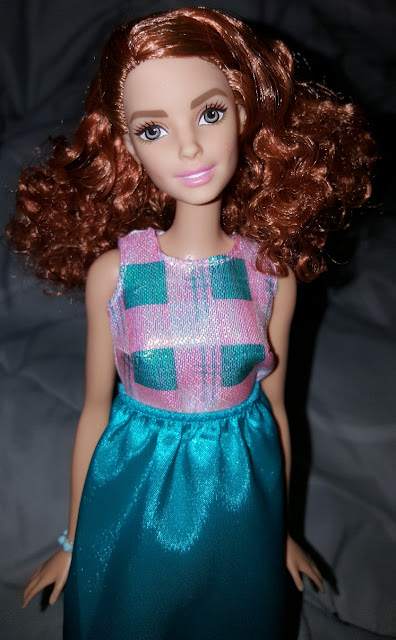 View my reviews for Curvy, Original, and Petite.
Posted by n at 2:37 PM No comments:


This was my other first choice doll out of the four. I love her outfit and her hair style. So cute!


Hello! Finally had the time to take some pictures and share some thoughts about one of my new Barbies! I decided to open the Original Barbie model first, just because it's an original Barbie. There will be less photos for this one I thinks.

I chose this Barbie because of her Asian eyes and long straight hair. When I originally decided to pick one of each up, she was in the final cut. (unlike my Curvy and Tall dolls, which I settled for because the ones I wanted were not for sale yet)

A few weeks ago, in a Facebook group I lurk in, a guy named Eric posted a group of Funko Pop Groots that he had customized for Vday.


I loved the idea of a Groot Rose! But the price he was charging for these customs were too much for me. However, I did have an extra Dancing Groot. I began to wonder if I could make my own Groot Rose. So I gave it a try! This isn't a tutorial or anything, just showing ya what I did.


Got an unexpected package in the mail Friday! 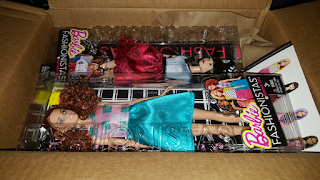 I got the shipping notification on Thursday to let me know these dolls were coming, but that was unexpected too, as I could have sworn I saw a release date of March for all of them!

Here are my three new Barbies! I have a Petite, an Original, and a Tall. Soo now I have all four body types!! *jigs* 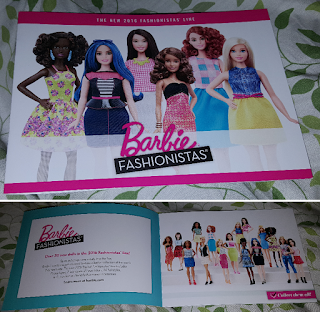 This box also included a checklist for the new Barbie line! Super cute!!


So expect some more posts from me this upcoming week! I'll be doing an individual review of each of these three Barbies, then a compare post of all four! ♥


It has been six months since I last shared any funko pops I picked up. I have not stopped picking up Funko Pops. In fact, I've almost doubled my collection. Heh.

Instead of sharing individual pics, I'll just share the two funko pops I got this past Saturday, and then I'll share a pic of my whole collection, and just list the new ones.

I wandered in to the Hot Topic hoping to pick up the Ninth Doctor and pink Harley, but I wasn't holding my breath for Harley. I figured she sold out pretty quick.

They have shelves that are stacked two high and three back with Pops, so I started from the bottom, and slowly started shifting Pops this way and that in search of Harley. The Ninth Doctor was super easy, they had a dozen of him. On the fourth shelf I check, in fact - that last shelf I can reach without asking for a ladder - at the very end, I find her. I find four of her. All hiding behind other pops, but there she was! So I happily grab my two new Pops and go to the register.

I place them on the counter. Both of the employees stare blankly at Harley.

"Where did you find that?! I've been telling people we sold out! I even tried looking for them!" The guy exclaims.

To which I reply, "They're kind of hidden, but there were four of them in a group on that shelf there. So there's three more..."

He then gets all scared that the people he turned away will notice this and get mad at him.

The moral of the story is you might not want to just ask to see if they have a pop, it might be safer to look for yourself. Because seriously this Hot Topic had four and the employees were telling people they were sold out. I don't blame the employees, obviously someone tried hiding them. But I wasn't going to give up until I couldn't reach the shelves, so I win. *shrug*

Moving on, here's an updated picture of my collection:


There we go! All of my Pops so far. They were either purchased by me or my guy, a couple were bought on clearance, and a couple were gifts. I still have quite a few I want, and Funko is apparently going to be at C2E2 this year, plus I'm looking forward to the vendor Pops, so I'm wondering what other pops I'm going to end up with this year! ♥


Greetings! It has been months since I've last posted here. My apologies. I'll give an excuse, but really, it's not all that surprising. I battle depression and anxiety and it's sometimes hard to keep up with things for me. But I haven't abandoned this blog. I'll still be here, posting when I'm up to it.


Last week, Mattel announced a new line of Barbies featuring three different body types. So of course, the very next day, I placed an order. However, many of the Barbies in this new line are either not available to preorder yet, or aren't coming out until next month, so instead of ordering one of the ones I'd really like to own, (or patiently waiting for them to become preorder-able) I settled for one I'd get sooner rather than later.

On the third, I got an email that she was shipped. And at 7am on Friday, I saw through tracking that she was on a truck ready to get delivered!